I recently had a chance to look over several proposals for new Risk Management Education Projects that RMA will fund later this summer. Several organizations throughout the country, including nonprofits and Historically Black Colleges and Universities among others, answered our call to request funding to train producers.

These education projects inform farmers about a wide variety of risk management topics. Farm risk management certainly consists of understanding crop insurance, but also includes preparing for the worst that mother nature can dish out.

The month of May ushers in wildfire season in California. It is a time when most residents keep tabs on the news and weather reports, especially producers. One of our current education partners, an organization called Farmer Campus, is training roughly 120 producers in California on wildfire preparedness and response and recovery strategies. They deliver training through workshops, online modules, workbooks, and regional networks.

I recently spoke with Farmer Campus Co-founder, Natalia Pinzón Jiménez, to check in on their RMA funded project and learn how they are equipping California producers to deal with an ever-present threat in the Golden State.

Marcia: It’s a good time to talk with you as wildfire season is underway. It can be overwhelming and stressful for producers to face any natural disaster, particularly with wildfire threats year after year in California.
Natalia: Yes. One of the things we are seeing as wildfires pick up is that there really are no resources that are specifically supporting agricultural producers in both preparing for and recovering from wildfires. What we set out to do is to create resources based on the needs that the farming community is describing. Senior members of the farming community are uniquely positioned to support wildfire risk management and bring together a network. Through our courses, farmers from across the state, in different regions, can organize by talking to each other and access resources that they didn't have. But more importantly, they're also taking a key role in helping to develop those resources.

Marcia: It’s often best to learn from those who have gone before us. So, it’s great to hear that those networks are developing through the courses your team has put together.
Natalia: The feedback that we've gotten from this course is a ton of gratitude, especially with the recent addition of the workbook, which is something that RMA is funding—the development of a book that pieces together different components of wildfire preparedness and recovery that we've found over the course of the last four years of doing research. A farmer from Sonoma County that raises cattle, does some beekeeping, and produces seasonal crops, told me that she wished the workbook existed before they were impacted by wildfire within the last few years. She said it would have made a huge difference for her operation. 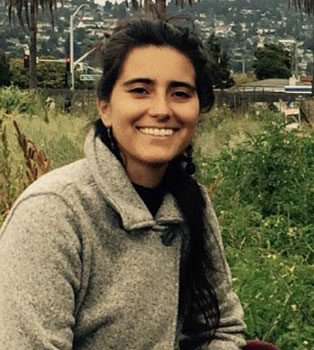 Marcia: Farming is already risky business in any part of the world, but there are certainly unique considerations for growers in your state.
Natalia: It's just hard to put into words how difficult it is to farm in California, which is so capitalized. And there is not just the capitalization of agriculture and makes it very hard for growers that don't have a lot of resources. There is also an issue with land access, a humongous issue with land access. And now we have a lot of ecological crises, including droughts and wildfires. So, the urgency of the topic of wildfire is what really motivates me, but also how precarious it is to farm in the state.

Marcia: There will certainly always be a need for what your team provides to farmers and ranchers in California, even after the course for those who are enrolled.
Natalia: That’s right. In fact, the course doesn't wrap up. We have a model where it's continuous. We have periods of large outreach where we bring people on and then we have live sessions throughout the year and then we just keep it running. Since it's an online course, we can keep it running on its own and we find that when we have the live session, it's more effective. We do try as much as possible to keep periods of the year with more life sessions, usually in the winter, it's easier for growers depending on the growers.

I’m grateful to Natalia and Farmer Campus for the support they have provided to farmers and ranchers. I look forward to hearing more about their program and its impact on the agricultural community in California.

In the coming months we will announce more projects that we will fund to prepare the next generation of farmers and ranchers to survive and thrive.