Supporting Farmers and the Environment with Cover Crop Incentives
February 25, 2022

Across the Department, there is a greater focus on addressing climate change than ever before and promoting ecofriendly farming methods that also improve the profitability of farmers and ranchers.

One such practice is the planting cover of crops, planted in the fall to improve soil health, prevent erosion, and gain other agronomic benefits. The most used cover crops are cereal rye, oats, and radishes.

This month RMA announced that producers who have coverage under most crop insurance policies are eligible for a premium benefit from USDA if they planted cover crops for 2022. The benefit is called the Pandemic Cover Crop Program, or PCCP, which began last year, with producers receiving $59.5 million in premium subsidies for 12.2 million acres of cover crops.

State and local governments are helping USDA promote the use of cover crops. One example is the state of Illinois, which invested money in a pilot crop insurance premium discount program for farmers through a partnership with RMA. The state’s program provides a $5 per acre crop insurance discount for farmers that plant cover crops. Last year the program provided discounts on 50,000 acres. This year, the program has grown two-fold to 100,000 acres.

I recently spoke with one of the many farmers that benefited from these state and federal cover crop incentives. Jeff O’Connor is a sixth-generation farmer from the town of Kankakee in northeast Illinois. He earned a bachelor’s degree in Ag Economics from the University of Illinois in 1988. He currently farms 800 acres of corn, soybeans, and wheat, including non-GMO varieties for specialty markets.

Jeff has been using cover crops for nearly 10 years and enjoys watching his soil improve. As you may have guessed from his surname, Jeff is descended from Irish Immigrants, whom he says likely weren't farmers.

“What I've learned to value from my ancestors is that they didn't know much about farming, and yet they succeeded,” he explains. “Starting with cover crops was nearly an unknown commodity to me as well but, I've learned how to make them work.” 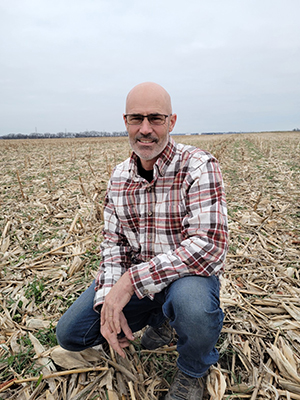 Jeff says he started using cereal rye as a cover crop and has stuck with it for cost reasons. Cereal rye is also known to reduce erosion and is prized as a pest and weed suppressor. Every year he raises a small field of cereal rye for harvest purposes. With wheat in his crop rotation, he says it is easy to harvest his own rye crop from some marginal acres and drastically reduce his seed cost for future cover crops. In recent years Jeff has been trying other varieties of cover crops.

Field resiliency, improved water infiltration rates, and improved water quality are the major benefits Jeff cites for using cover crops. Even though much of his farm ground is well drained, he points out some fields that are still saddled with some wet areas that benefit from the practice.

“Once I quit doing whole field tillage and then added cover crops, I found those wet areas developed stronger soils and dried out quicker. It took about 3-5 years to really see the changes,” he explains. “They are still the wettest areas, but I can now do field work much sooner than with the old system of farming.” 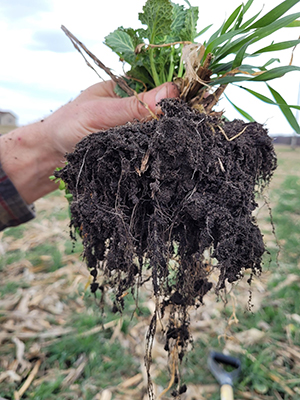 Farmer Jeff O’Connor holds up a clump of soil, displaying
roots of cereal rye — a cover crop used on his farm

In his first year using cover crops, Jeff took a very scientific approach, planting the same variety of corn in two different fields. Both fields had the same soil types, fertility levels, and applied fertilizer. After harvest, one field was planted to cereal rye in early fall and the other wasn't.

“The following spring, I took water samples from both fields for 6 weeks and sent them to our local water company for nitrate testing,” he says. “The field with cereal rye had a 60% reduction in nitrate levels. I don't like the idea of excess nitrogen leaving my fields and cover crops help prevent this.”

While Jeff has enjoyed a lot of success using cover crops in his operation, he advises producers who are looking to start the practice to go easy at first, seek assistance, and learn from others.

“Begin by using cereal rye after corn. If cost share is important, look for funding help through your local Conservation funds,” he explains. “Talk to someone who has done it before. They're always willing to share their successes and mistakes so listen carefully!”

Jeff says he appreciates the Pandemic Cover Crop Program for the benefit to producers and hopes it promotes the continued growth of cover crop practices throughout the country.

“Obviously, the monetary savings is important. What I value is that it provides savings in an area, crop insurance, where the cover crop practice actually does reduce risk to the producer and USDA,” he says. “This relationship can, and should, be the backbone for increased cover crop support.”

Farmers like Jeff are on the frontlines in the fight to reduce climate change. Together with producers and our partners we can lead the way with investments in climate smart solutions that improve the resilience of producers.

I thank Jeff for sharing his success story and RMA’s Springfield Office for the tireless work they do throughout Illinois and the Midwest to serve farmers and ranchers.